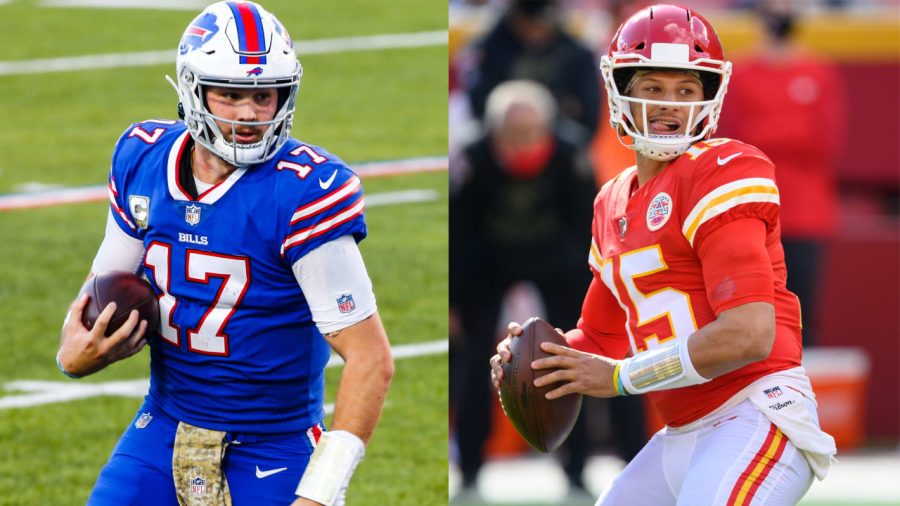 Josh Allen and the Bills head to KC to take on Patrick Mahomes and the Chiefs on Sunday.

“He was a garbage can running downhill.”

And with that eloquent description of Buffalo Bills quarterback Josh Allen we move into the Divisional Round of the NFL Playoffs.

This week’s games bring a lot of old and a little new to the mix as only one team- the Bengals – visit the divisional round for the first time in what seems an eternity. For the other seven teams taking the field this weekend anything less than a trip to the conference championship game will be a disappointment.

The first game of the weekend pits the upstart Bengals against the top-seeded Tennessee. The question on everyone’s mind (especially those on the Bengals defense) is will Derrick Henry play? Henry, arguably the NFL’s best running back, has been on the shelf since week 8 when he went down with a foot injury. For Tennessee, a healthy Henry in the backfield could go a long way toward getting them to championship weekend – in Nashville – next week. For the Bengals, who took down the Raiders last week at home, only time will tell if the team’s core of young players can handle the big stage.

The second game has the Forty-Niners travelling to frigid Green Bay to take on Aaron Rodgers and the Packers. While Saturday night temperatures are expected to be in the teens at Lambeau Field, you can bet that San Francisco will be ready just like they were in the comfy confines in Dallas last week. While Lambeau lacks one of the world’s largest video screens and a dome, it will have close to 80,000 green-clad fans ready to rock so the Niners better be ready.

Sunday’s first game sends Matthew Stafford, OBJ, Cooper Kupp, Aaron Donald, and all of the other all-stars on the Rams down to Tampa to take on Tom Brady and the somewhat undermanned Buccaneers. While Sean McVay and the LA brass has picked up stars as the season has progressed, Bruce Arians and his staff have had to make do with a roster that has seen its share of injuries. Don’t you feel terrible for the defending Super Bowl champs? No? Neither do the Rams who will look to build off of an impressive wild card win over the bumbling Cardinals. If Donald and his defensive mates can pressure Brady, we could see a new champ this year, but – as many teams have learned – don’t count TB12 out just yet.

The final game of the weekend may be the best matchup as the Bills head west to KC to take on the Chiefs. While the Bills came into KC earlier in the season and rocked the Chiefs 38-20 to drop the Chiefs to 2-3 and send the league into a bit of a tizzy, this is not the same KC team that left the field that day. Since that defeat, the Chiefs have gone 11-2, won their division, secured the #2 seed, and won a playoff game. Of course, the Bills managed to take care of things on their end as well (minus one epic loss at home to the Patriots) so both teams are ready for this one. Last year the Chiefs managed to take care of the Bills in the AFC Championship game 38-24 (anyone want to bet that the winner scores 38 this time around as well?) so redemption will certainly be on the mind of Josh Allen, Micah Hyde, Stefon Diggs and the rest of the Buffalo squad.