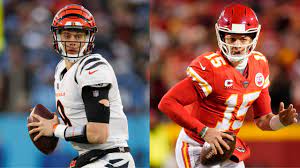 Joe Burrow leads the surprising Bengals into Kansas City to take on Patrick Mahomes and the Chiefs in the AFC, while the Niners head to LA to take on Rams.

These might be the five most popular words for a Ravens fan on this week’s podcast as they are forced to discuss none other than the Cincinnati Bengals in the AFC CHAMPIONSHIP game.

While nobody in the Pigskin Podcast crew – and by crew I mean C-R-E-W as this year’s group was joined by the OG’s from the podcast’s past – has a team in it anymore, it did not stop them from giving their two cents on last week’s amazing games and this week’s two big matchups.

While every AFC North podcaster (and there are a lot in this one) loves to pile on the “Bungles” for their history of ineptitude, they all managed to find the intestinal fortitude to see the BENGALS for what they truly are right now: a young, talented team that is tough to handle. Heck, one of them even picked them to upset the Chiefs this week. While Emmanuel’s prediction was the only one to go for the Bengals, there is no denying that this team has surprised everyone. As for the Chiefs, who look to make their third straight Super Bowl appearance, their Divisional round win over the Bills was a game that will not be soon forgotten. Whether they can settle themselves down after that back-and-forth battle between Patrick Mahomes and Josh Allen and focus on what many see as a lesser opponent will be a key to this interesting matchup.

On the NFC side, podcast-alum Essey fully expected to bask in the glow of an Aaron Rodgers led Packer squad needing just one more win to get to the Super Bowl. However, that all came crashing down in a loss that he called “Rodgers’ fault.” While he was surprised – and saddened – at the loss, there were many who picked the Niners to upset the Pack, even in the snowy environs of Lambeau. With another strong performance from the defense and Deebo Samuel, the Niners could punch their ticket to Super Bowl 56. In fact, neither the Niners or the Rams will need a ticket at all as the Super Bowl will be played – albeit two weeks later – on the same field, SoFi Stadium, that this matchup will take place. If San Francisco can duplicate the defensive performance they had against Green Bay, it could mean a clean sweep of the Rams on the season as they are 2-0 against their rivals this year. The Rams, who looked unstoppable in the first half against Tampa last week, may be peaking at just the right time as all of the stars they’ve picked up along the way this season seem to be rounding into form. Ultimately, the question in this one is do the Niners simply have the Rams’ number this year or is it truly just too hard to beat a team three times in a season. I guess we’ll find out Sunday night.

So, sit back and take a listen as our Pigskin Podcasters – the current (Rushabh & Angad) and the alums (Emmanuel, Japnith, Oseze, Faizan, and Esse) talk about these two championship round matchups on the PBHS Edge Pigskin Podcast.