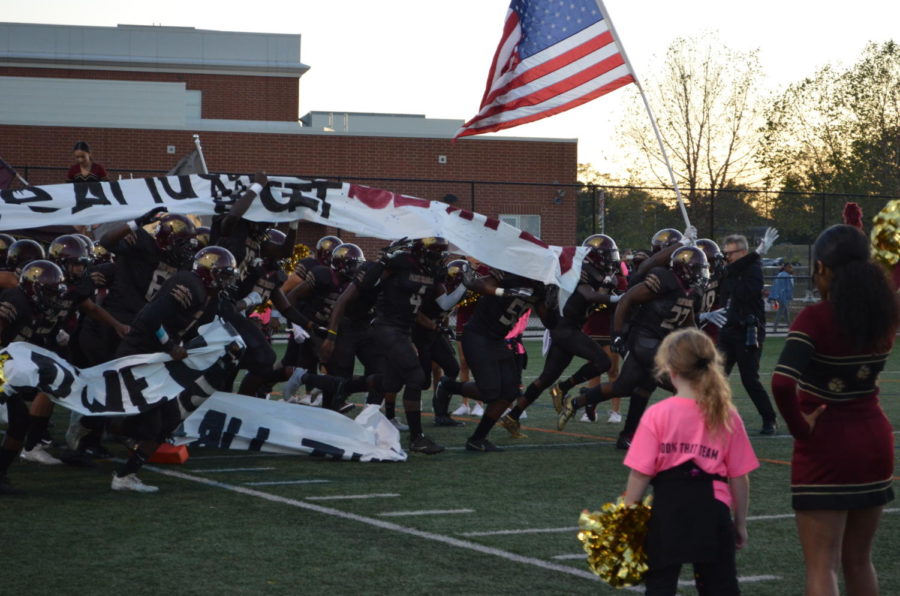 On Friday, September 20th, our Paint Branch Panthers took on their cross-town rivals, the Springbrook Blue Devils. Coming off of a week 2 loss to Northwest, the Panthers were ready to take down the Blue Devils in what would be by far the most intense game of the young season.

Prior to the game, defensive line and special teams Coach Blackwell said he felt good about week three, stating that  “even though we didn’t win last week, we played well but made small mistakes. I don’t think we’ll make those mistakes this week being that we had a good practice!”

Coach Blackwell’s confidence was prophetic as the Panthers dominated the Blue Devils, ending the game with a score of 50-6. Within the first three minutes of the game’s start, a completed pass from sophomore quarterback Octavian Smith to junior receiver Ira Oniha put the Panthers on the board with the first of what would be eight touchdowns that night.

The Panthers were just getting started, but the Blue Devils weren’t going down without a fight. Junior Blue Devil Adrian Lloyd created a route open and caught a pass from senior Elijah Lindsey and rambled through the defense before being taken down by a Panther. Unfortunately for Springbrook, they could not do much more and found themselves overwhelmed by the Panther defense.

Each PB player had a consistent goal, which was to do more than just win.  According to Smith, who had three passing touchdowns that night, the team’s goal was to “shoot big and work toward the gold [championship].”

For the Panthers, the touchdown parade continued after stopping the Blue Devils. Smith completed another touchdown pass, this one 26 yards to sophomore receiver Isaiah Russell. The kick was good and the Panthers were up 14-0.But that wasn’t it. Towards the end of the first quarter, senior Sam Doku ran 6 yards to the end zone. At the rate our Panthers were scoring, they knew they had this game in the bag.

However, the Panthers wanted to prove themselves, especially to one of their greatest rivals, so the onslaught continued. The Blue Devils wanted to make sure it was no walk in the park, but there was not much they could do to prevent it on this night. By the end of the second quarter the Panthers were on a roll, with touchdowns by Doku, senior Wisdom Agbeyome, and Rusell.

It seemed as though the Blue Devils were starting to give up as the game went on, but PB wanted to enjoy this a bit more and capped their scoring as junior Elijah Williams ran 1 yard putting the Panthers up at 50-0.

The crowd was enthusiastic throughout the whole game, but towards the end of the fourth quarter PB started losing focus when a fight broke out in the stands, which may have caused them to let Blue Devil Elijah Lindsey complete a 72-yd pass to senior Anthony Gomez, putting the Devils on the board and avoiding the shutout.

PB sophomore receiver Chimoke Nwogu, who played for the first time since the season started, acknowledged that the end of the game was tough on them. “We could’ve done better on defense and not be distracted by what was going on in the stands,” he said.

As the Panthers enjoyed their victory against Springbrook, which put them at 2-1, they had to ready themselves for another rivalry game next week when they take on the Blair Blazers.