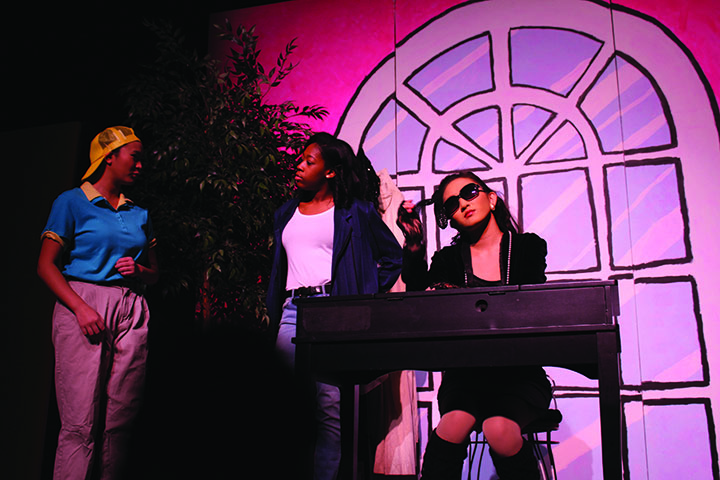 Paint Branch High School’s theatre club, Perspectives, proved that they are able to tackle all things acting in their performance of Shakespeare’s Twelfth Night, a 17th-century romantic comedy.

The story centers on twin characters, Viola (played by Natasha Dao) and Sebastian (Michelle Gutierrez), who are separated in a shipwreck. After the shipwreck, Viola disguises herself as a man and is renamed Cesario. “He” is then given a task from the Duke of Illyria, Orsino, to persuade Olivia (Lauren Gantman) to fall in love with Orsino. Olivia’s companions encourage her to fall in love in the hope that it will distract her from mourning her brother and father. The plot comes alive when Olivia falls in love with Cesario instead.

Like any Shakespeare play, Twelfth Night was difficult for audiences to follow because of its sophisticated language. A simple statement such as “I am tired” translates to “I am not restful” in Shakespeare. Students spend an entire class period deciphering two paragraphs of Shakespeare, so one can imagine a student audience – and many adults as well – trying to decode a Shakespeare play in real-time. Quite a challenge! Although many had only a vague grasp of what the characters were discussing on stage, the actors compensated by intentionally being overdramatic with hand motions and voice inflections. It would be wrong to not publically applaud characters such as Clown/Feste (Mary Shawhan), Toby (Annie Petersen), Maria (Mackenzie Ezegbunham), and Andrew Aguecheek (Jonathen Lopez) for their incredibly engaging and lively performances. Members of Perspectives truly brought their characters to life.

When asked about her experience working with such an advanced play, Mary Shawhan exclaimed that “one of the challenges was that [they] weren’t able to rely on the words to get [their] message across,” instead actors have to “work through inflections and movements.”
Shawhan asserts that performing Twelfth Night “was a challenge but a really good exercise in being silly and expressive on stage.”

Mr. Bergmann, who took over the directors role from the esteemed Ms. Perkins for the fall production, expresses that he was aware of the tribulations of performing and watching Shakespeare, but his intention was to offer a play that would “appeal to students as well as challenge them.” Prior to working with Perspectives, Mr. Bergmann had been the director of Parkland Middle School’s productions for 15 years and has worked extensively in community theater for 20+ years. In his “Director’s Note” located in the playbill for Twelfth Night, he exclaimed that when Ms. Perkins approached him and asked if he would like to be head director during her break, he immediately said, “Yes!” He thought directing a high school production would be “easier” than directing a middle school one because of the larger range of shows that high school theatre has available to them.

Paint Branch is excited to see Mr. Bergmann’s directing skills with a musical as he continues to handle the job when Perspectives hits the stage again in the upcoming spring production of Disney’s The Little Mermaid!