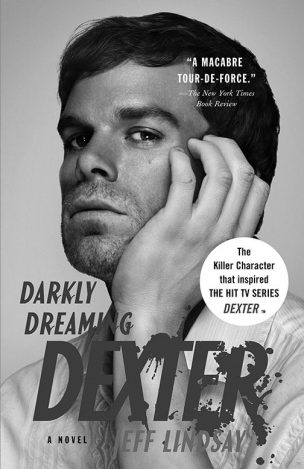 What happens when a blood spatter expert arrives at a homicide scene where there is no blood? There is a body of course, but no blood. None.

In Jeff Lindsay’s suspense thriller Darkly Dreaming Dexter, sociopathic serial killer Dexter Morgan finds himself in this exact position. As multiple victims are found dismembered and bloodless in Miami, Florida, the disturbed expert stumbles on the line between admiration and uncertainty. He holds the killer in high-esteem, regarding his work as “neat” like his own, but he begins to obsess over it. While he once slumbered dreamless and still, he now sleeps erratically as the similarities the murders share with his own keep the sociopath up at night doubting his own sanity. The realization that he could actually be the person responsible, unconsciously committing the identical murders, weighs on him relentlessly. “I wake up at the sink, washing blood off my hands after a ‘dream’ in which I carefully and gleefully got blood all over my hands doing things I only dream about doing.” he reflects at one point.

Flashbacks throughout the story reveal fragments of Dexter’s past and why he is the “neat monster” he is. Nevertheless, in essence, he is a vigilante. Due to his strict guidelines for killing, entitled the “Code of Harry” after his adoptive father, Dexter sets out to execute those only classified as deserving to die (like rapists and serial killers). It is a way of channeling his insatiable crave to kill, the same crave that leads to him suspecting himself of being the same artist he so deeply reveres. Admiring one “work of art” the unknown dismemberer left for display, Dexter thinks to himself that he “touched the heart of what my killing was about. In the way he worked, of course, and not in his selection of victims.”

Throughout the novel, however, the first-person perspective creates a balance so as not to become overbearingly grim. The wit and sarcasm of Dexter’s voice mesh with his levity and humanity-mocking to lighten the piece’s tone. The subplots support this effort as well. Having someone so inhuman and anti-social dragged into such human and social situations serves as a comical deviation at times, but also a necessary elaboration of Dexter’s character.

Generalizing the novel as just another story about a murderous psychopath is an easy mistake to make before reading it. The band of side-characters – including his combative sister Debra, who is fighting to climb the ranks of the police force, his doting girlfriend Rita, who is trying to raise her two children following years of abuse by their father, and everyone else in his personal and work life – pull the shell of a man in all different directions.

At only 288 pages, Darkly Dreaming Dexter serves as a quick-paced thriller for anyone in search of a compelling story.