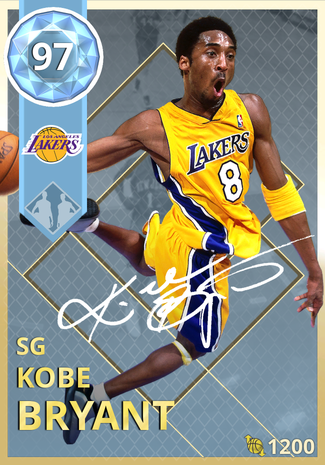 Kobe Bryant was one of the best ever, which is conveyed by his NBA 2K18 MyTeam card with a 97 overall rating.

The day that I found out that Kobe Bryant passed away in a helicopter crash, I was taking a nap.

It was late afternoon on the weekend before the second semester. I was awakened by my older brother, Hamza. He and I are big fans of Kobe Bryant, so much so that our brother-in-law brought us each a yellow Kobe jersey back from his trip to California sometime in early 2019 because he knew we were big fans.

“Ay, get up. Kobe died,” Hamza said. It took me a few moments to take in his message. My head was foggy and I didn’t believe him. Kobe? Dead? He was the last person I would expect to die. Only 41 years old and in perfect health. “One of his daughters too,” Hamza followed with. I thought this was a sick joke; I needed proof.

He sat down next to me and showed me a tweet. It had a picture of Kobe fanning his jersey and the words, “RIP Legend” with the dates 1978-2020 under it. I still didn’t believe it. My stubborn, tired mind made irrational conclusions. Maybe he used Photoshop, was one of them. So I searched ‘Kobe’ and whipped my eyes on the right side where the Wikipedia entry lies. “Kobe Bryant, American Basketball Player. Born: August 23rd, 1978, Died: January 26th, 2020.” There it was – in print; irrefutable proof. The truth was laid out for me and I couldn’t figure out how to feel. It didn’t feel real. Kobe? Dead? Even after confirmation, I was still in shock. Since Kobe retired in 2016, the only place we can really get his feel is through 2K. Playing as the Lakers and trying to replay the highlights of his career, winning Diamond Kobe in MyTeam, and playing random All-Stars one-on-one as Kobe on Blacktop are prime examples of ways that you can still enjoy channeling your inner Kobe.

Although you can still do those things, the NBA and the NBA community lost one of their most precious gems.