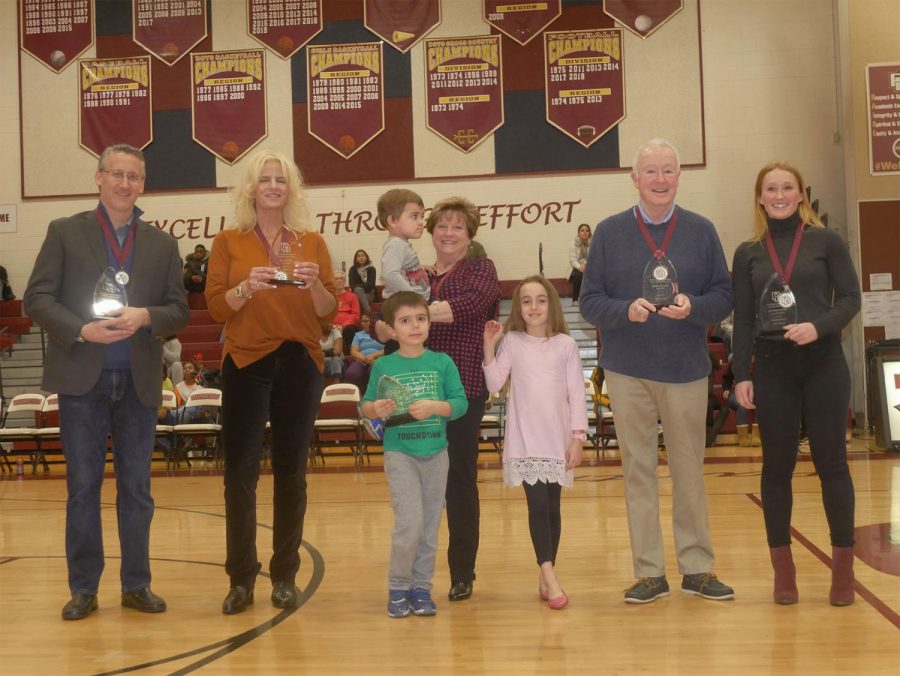 Members of the 2019 Hall of Fame class - and those standing in for members who could not attend - stand at mid-court to celebrate their achievement.

On Friday, January 31, 2020, Paint Branch inducted six Panther greats into the school’s athletic hall of fame. The ceremony took place after the boys’ varsity basketball win against the Whitman Vikings, where the honorees were recognized for their importance in shaping Paint Branch athletics.

The hall of fame provides a way of honoring the best of Panther athletics, both players and coaches. Each of the night’s honorees made a significant impact within Paint Branch athletics, and these former students and coaches left an indelible mark on the athletic history of the school.

For this year’s honorees, the thought of being inducted into PB’s Hall of Fame was a pleasant surprise. One doesn’t join a team or coach a sport simply in the hope of one day being honored in such a way. For Ryan Lambert, who went on to play baseball at Virginia Tech after high school, playing for PB was not about a legacy; it was more about the enjoyment of the game.“When you’re playing high school sports, you’re not thinking of winning the hall of fame,” he said. “You’re just thinking of having a good time, trying to win games and helping your teammates….It’s the relationships that matter in the end, I’m reminded of that here tonight.”

For Paint Branch Athletic Director Ms. Heather Podosek the hall of fame ceremony is a way of “showcasing our diversity from the start; our diversity in what we did, who we were. Parents will be able to tell stories about what it was like in the 70s here when it was all farmland.”

This was the second hall of fame induction ceremony with the 2018 event inducting the original 19 members. Ms. Podosek says that the school will continue honoring panther greats and all they did as student-athletes or coaches. “I think it’s good for our community,” she says. “It’s good for our students and it’s good for our staff to see others come back. [These individuals] were significant athletes here, but what they did afterwards is a great part of it as well; seeing what they grew into as young men and women.”

It was a great night for the honorees both during the ceremony and after as they were able to chat with one another and end the night watching the girls’ varsity team dominate Whitman to bring the night’s festivities to a proud closing.