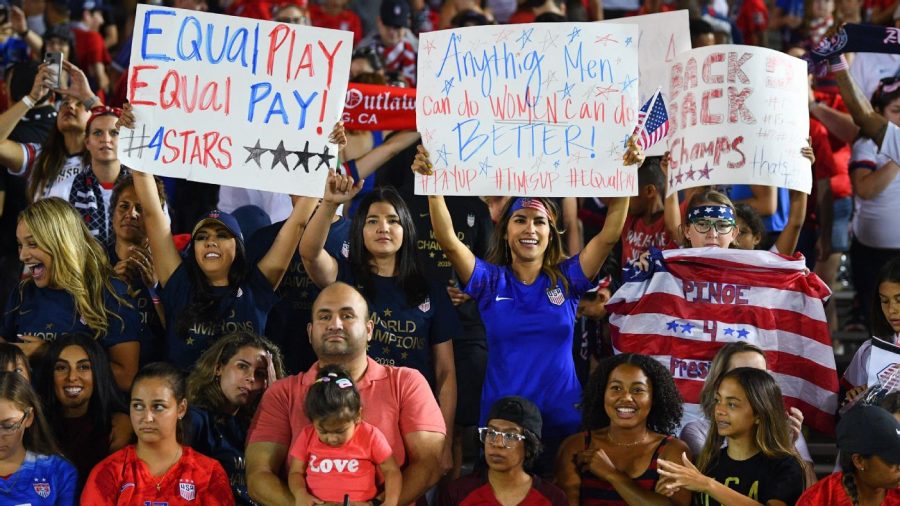 The accomplished U.S. Women’s National Soccer team made headlines last year when many current and former players sued the U.S. Soccer Federation (USSF), the governing body in charge of salaries for them and their male counterparts, the U.S. Men’s National Team (USMNT). They claim that unequal pay, unequal conditions, and unequal investment for the women’s team compared to the men’s is evidence of gender discrimination.

The lawsuit has been framed, by supporters and critics alike, on the basis of “equal pay for equal work.” The media and some of the players have pointed to the USWNT consistently winning tournaments and outperforming both the national teams of other countries and the USMNT, and suggest that their success proves that they deserve to be paid the same as members of the men’s team, if not more. This distinction misrepresents the most important part of the lawsuit and it opens the doors for many valid criticisms —  the primary one being that, for athletes in all spectator sports, revenue is typically what determines income, not effort. Subsequently, many argue that the lack of interest in the female team is the main contributor to their lower salaries, not discrimination on the part of the USSF. The focus from all sides seems to be the final numbers — gross revenue and income — but those are just symptoms of the larger issue.

The critics are right that revenue brought in can’t be ignored. Although the revenue for the USWNT this past year has been much higher than projected, that hasn’t typically been the case. According to the USSF, from 2009 to 2019, over the course of 238 games, the women generated $101.3 million, whereas the men generated $185.7 million in just 191 games. Clearly, there is a gap in the revenue that women’s games have been able to generate compared to the men’s. But the discussion shouldn’t end there. USSF should look at those numbers, and rather than opting to pay them less, they should seek to understand why the women’s team is bringing in less revenue and what part their federation plays in that. It’s important to emphasize that these women definitely deserve to earn the same as the men they’re working just as hard as, but blindly agreeing to pay them equally doesn’t address the underlying reasons why this discrepancy exists.

When we focus on “equal pay” and make that the center of the conversation, it’s easy to miss the many other problems that prevent the growth of women’s sports and hurt their ability to generate the same revenue as men’s sports — including unequal coverage, unequal investment, and unequal promotion.

The Golden Triangle, as these three areas are colloquially known, is the commercial link between the sport, media, and sponsorships. All parts of the triangle rely on each other and the strength of this link determines the success of the sport. When a sport gets media attention, popularity increases. This in turn  attracts sponsors that bring in more revenue to the sport, which improves the sport’s quality and popularity, encouraging the media to cover it more. Without proper exposure, it’s harder for women’s sports to gain legitimacy, and this in turn affects ticket sales and sponsorships.

To put it into perspective, according to UNESCO (United Nations Educational, Scientific and Cultural Organization), 40% of athletes are women, but they only get 4% of the news coverage. If women’s sports aren’t on people’s radars, they don’t even have the opportunity to show they’re profitable. Additionally, all of our perceptions of sports, or entertainment in general, are influenced by the media that’s available to us, so the fact that women’s sports are so under-covered puts them at an inherent disadvantage and prevents them from advancing.

While the media has a role in increasing popularity and encouraging sponsors, so does the sport itself. If a league or team is underfunded, the players are going to underperform, which disrupts the whole equation. In the USWNT lawsuit, they mention countless examples of the USSF giving the women’s team poorer quality turf to play on, worse traveling conditions, and less game promotion than the men’s team. All of these things serve to hinder their ability to generate revenue, notably promotion. Without proper promotion and marketing, it’s difficult not only to attract a fanbase who will contribute to the revenue via merchandise sales, but it’s also difficult to attract the media. Clearly, gender discrimination an issue plaguing women’s teams on all fronts.

After months of attempts at negotiation, the litigants in the Equal Pay lawsuit have not reached an agreement and it is expected to go to trial this May. The outcome of the lawsuit is still anyone’s guess, because although the women’s case is compelling, there are a number of complicating factors. Still, the discussion it has sparked about investment in women’s sports has been crucial.

Regardless of the final outcome, if the aforementioned issues aren’t addressed, they will persist. Equal opportunity is what we need to be striving for, not equal outcome. The women are fulfilling their part of the equation by playing hard and continuing to win games; they can only do so much on the marketing side. It’s up to the media, sponsors, and the federation itself to support the team, promote games, and give them exposure. Only when both the men’s and women’s teams are poured into equally, can we compare revenue numbers to determine a payment system that’s truly equitable.