Why Do We Dream? 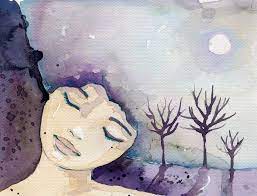 Have you ever had a dream that you thought was normal but then you tell someone else and they’re like “that makes no sense”? Or are you one of those people who keeps their dream to themselves and tries to interpret your dream based on your life experiences?

Healthline.com says, “Dreams are hallucinations that happen during certain stages of sleep. When you’re awake, your thoughts have a certain logic to them. When you sleep, your brain is still active, but your thoughts or dreams often make little or no sense.”

I think we have all experienced the fact that sometimes our dreams are illogical, like when you are trying to run and for some strange reason, it’s in slow motion. Or, like me, see people that you know from different parts of your life all in the same place talking like they actually know each other. One question that dreaming leaves people with is, “What is the reason for these strange illusions?”

People have always dreamed and written down these mental visions questioning them, and over the years professionals have still not figured out why we actually dream. Many scientists have theories and maybe even you yourself have a few guesses. In the “Why Do We Dream?” TedEd talk by Amy Adkins, she talks about the seven main theories of why we dream, three of which present some very interesting thoughts.

We dream to fulfill our wishes. Sigmund Freud, an Austrian neurologist and psychoanalyst from the 1900s is well-known for many things, including his work on the interpretation of dreams. In a Britannica piece about Freud and his work, they express Freud’s thinking on dreams, including the idea that  “dreams are the disguised expression of wish fulfillment. Like neurotic symptoms, they are the effects of compromises in the psyche between desires and prohibitions in conflict with their realization.”

On the same subject of dreaming to fulfill our wishes, the video “Why do we dream?” by Adkins says, “Freud theorized that everything we remember when we wake up from a dream is a symbolic representation of our unconscious primitive thoughts, urges, and desires. Freud believed that by analyzing those remembered elements, the unconscious content would be revealed to our conscious mind.” If you can interpret your dreams it could possibly reveal your deepest thoughts and feelings.

We dream to remember.  In their study, “Memory, Sleep, and Dreaming: Experiencing Consolidation,” Erin J. Wamsley, and Robert Stickgold wrote, “In 1900, Freud famously coined the term ‘day residue’ to describe the presence of recent life experience in dream content.” They claim that the way memories are incorporated into dreams is similar to the way memories become more permanent during sleep, and it can help us understand the process of long-term memory.

This concept is covered In Adkins’ TedEd talk. In her talk, she notes that in 2010 researchers did an experiment where all of the participants went through a 3D maze and were timed. Then in the second go-round, one group slept and dreamed about the maze. Another went to sleep but didn’t dream about the maze, and the last group just stayed awake thinking about the maze. In the end, the group that slept and dreamt about the maze did best overall going through on their second attempt. From this experiment, the researchers theorized that “certain memory processes can happen only when we are asleep, and our dreams are a signal that these processes are taking place.”

We dream to forget. In her “Why do we dream?” video Adkins says there are about ten trillion neural connections in your brain and they are created by everything you think and do. “A 1983 neurobiological theory of dreaming called reverse learning, holds that while sleeping, and mainly during REM sleep, your neocortex [the neocortex processes perception, decision-making, and language] reviews these neural connections and dumps the unnecessary ones.” She claims that without the unlearning process that results in your dreams, your brain would have too many useless connections. Those unwanted thoughts could interrupt the needed thinking that you need while conscious.

Dreams are like short movie clips that we can only see when we are asleep. Sure the movie theater would be our mind in this analogy, but why are they playing these clips? Why do we dream? No one has the absolute answer to that question, but over the years many theories have arisen from this very thought. With the amount of research and testing that has been done to find the answer to this question, you would think that we have some sort of conclusion–but dreams continue to confound us. Personally, I think all of these theories are correct in their own way. What do you think? Maybe you should sleep on it.

Read my other article on dreams titled Lucid Dreams.