The PB College Fair is Back! 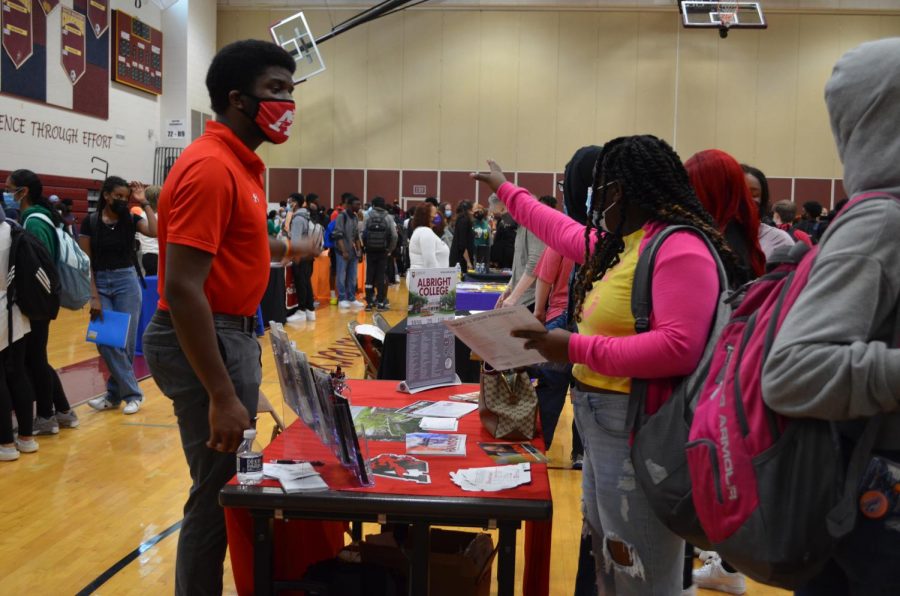 Stepping into the hot and sweaty gym on Thursday, October 14th, students had the opportunity to feel what it’s like to play a game in PB’s gym. What game was it, you wonder? Was it the varsity basketball team taking on a rival or the co-ed volleyball team finishing off an intense match? Not quite. This event was PB’s first college fair since the reopening of in-person school.

While seniors, juniors, and sophomores did have to manage the blast of heat that met them as they walked through the doors, they did benefit from more than forty college representatives who came to meet and recruit students.

Senior Anthony Richardson described his experience at the college fair as advantageous to his ongoing college application process. “The representatives I met with were very welcoming and informative,” he said. “They were good at explaining what programs and majors are offered at their schools, which made it easy for me to talk with them.”

After senior Alimou Bokoum thoroughly wandered around the gym, he expressed mixed feelings about the event’s lineup. He appreciated the opportunity to explore various colleges he hadn’t heard of before, but expected to see more of the schools that he was already familiar with and looking into. “For next year, I think PB should ask students specifically what schools they want to meet at the college fair. By doing so, more students will have the drive and determination to take the event seriously, because right now, many are just walking about with little interest.”

Bokoum’s issue was something that College and Career Coordinator Ms. Kelly understands. Her goal for the college fair is to bring students face-to-face with as many schools as possible. For Ms. Kelly, who faced the unprecedented challenges of organizing a college fair during the COVID-19 pandemic, getting schools to attend the fair was somewhat of a challenge. “Unfortunately, some schools that are of popular interest for students including Montgomery College and Johns Hopkins University were unable to make it this year,” she stated. “As we’re still in a pandemic, these colleges have decided to participate in virtual college fairs only.” Although the school selection was smaller compared to previous fairs, she hopes that students were still able to “gain a lot of knowledge about the schools that were available—tuition, majors, classes; anything they want to learn about.”

With the circumstances of the persisting pandemic, it has been difficult for students to fully grasp how quickly the end of their high school careers is approaching. Nonetheless, many students found their interactions at the college fair to be worthwhile as they plan and prepare for life after high school.