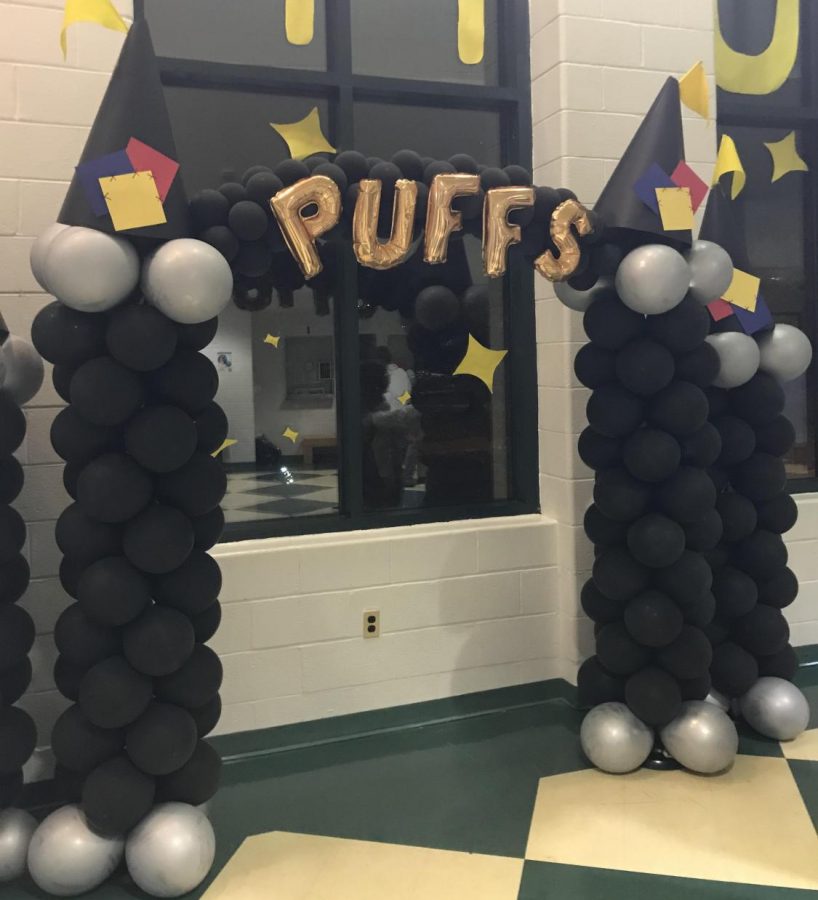 Magic was in the air at Albert Einstein High School on Saturday, November 13th as the closing night of the S.T.A.G.E. program’s autumn production of Puffs, or Seven Increasingly Eventful Years at a Certain School of Magic and Magic kicked off at around 7 pm.

Puffs is an incredibly popular transformative retelling of the Harry Potter series through the eyes of the Puffs (the name used in the play for the Hufflepuff House). The play is split up into seven books, parodying the seven Harry Potter novels. The show is a fast-paced, snappy, and silly production that spoofs the best-selling franchise and makes sure not to take itself too seriously.

The play begins with the Narrators (Ambar Auth and Molly Woodward) telling the story of the orphaned baby Harry Potter, and then dismissing his narrative and choosing instead to focus on another orphaned child, Wayne Hopkins (Carl Parkin). Wayne lives with his uncle in New Mexico and one day receives a letter that invites Wayne to a magical school in England. Hearing this, his uncle tells him his parents were wizards and rushes to get him to the train station.

Once at the school, Wayne gets sorted with the other magical misfits into one of four houses: the Puffs, known for their unremarkable nature. The other houses are the Snakes, known as the cunning house; the Braves, known for their foolhardy nature; and the Smarts, known for their, well, smarts. There he meets Oliver Rivers (Antonio Rivera), a nervous math savant, and Megan Jones (India Eddy), an angry girl who is disdainful of the Puffs and thinks she should’ve been sorted into the Snakes. The Snakes are known as the cunning house, the Braves are known for their foolhardy nature, and the Smarts are, well… smart. They also meet the other members of their house, including Ernie Mac (Boaz Levone), J. Finch (Zesun Hossain), Hannah (Sidra Hoffman), Sally Perks (Arwyn Hager), Leanne (Kendall Cox), Susie Bones (Carmen McFadden), and the leader of the Puffs, Cedric (Jazz Caparas).

Cedric tells his fellow students not to discount themselves just because they’re Puffs. Wayne and Oliver bond over their lack of familiarity with magic. During a feast, Wayne and Oliver realize that Megan is missing from the Puffs table. They go to find her and soon discover her in a forbidden chamber. Megan eventually agrees to become friends with the boys. After they become friends, seven eventful years play out, with mystery, disappointment and death. Pressure on the Puffs and their peers mounts year by year.

“Lucky” isn’t a word that applies to Wayne, or his fellow Puffs. Plagued by misfortune since birth and undervalued by their peers, they must work together to overcome their differences and survive the constant dangers, twists, and turns of the School of Magic and Magic.

Friendship is a constant theme throughout the play, and this was mirrored in the cast as well. When asked what she took away most from the production and the S.T.A.G.E. program as a whole, senior Sidra Hoffman who played Hannah and others said “I think, it’s probably like, I definitely have developed a lot of good skills and stuff—but it’s probably like the family, the friends and the community you build when you’re doing it.”