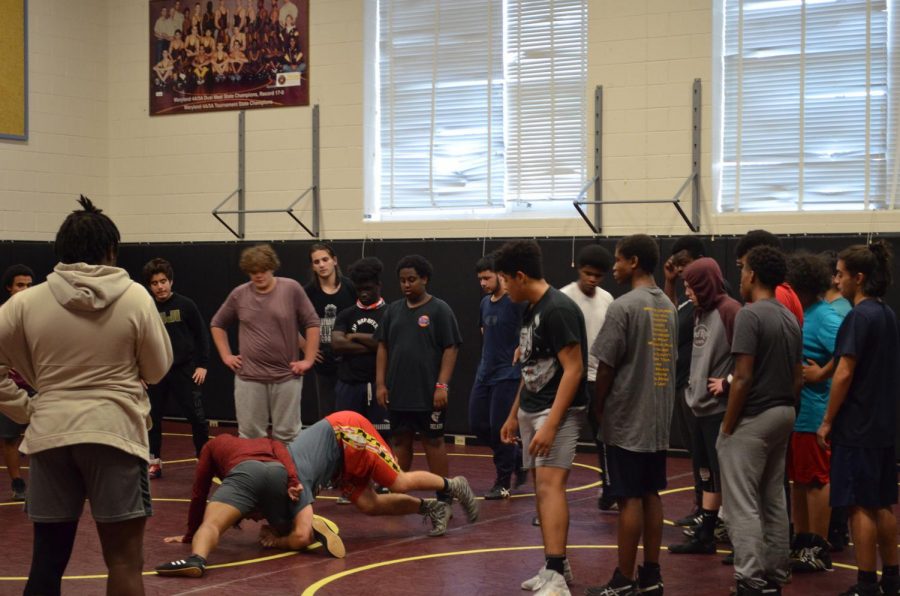 Coach Warner preparing Paint Branch for battle against the rest of MOCO.

While Paint Branch Varsity Wrestling had their first match of the season against the Northwood Gladiators canceled due to Covid related issues, the team is still readying itself for a big year on the mat.

Entering his third year coaching Paint Branch Wrestling Coach Warner is looking to “Build a strong team of Paint Branch athletes from across all sports backgrounds. Since wrestling is the best cross-training sport you can do, we believe that wrestling has something to help every young athlete, from tackling in football to running the bases in baseball and the field in lacrosse. We are trying to bring back wrestling as one of our schools’ top-performing sports as it once was when we dominated throughout the ’80s and won our second state championship in 2001.”

Coach Warner’s passion for wrestling and his desire to bring back the glory days of the program is evident in all that he says about the team. This is something his wrestlers acknowledge as well as the fact that he is a fun coach who knows when he needs to be serious.

Approaching their 4th week of practice, Foster  who wrestles at 145 highlights that the “Importance of practice is to work together to get better, to prepare yourselves mentally and physically.”

Hoffman also recognizes the importance of practice as he knows that “with repetition comes muscle memory.”

Paint Branch Wrestling’s last real season was in the winter of 2020 where they finished with a sub .500 record. Von Rossing highlights that one thing they are trying to improve on is “stamina” which will help them finish matches strong. He notes that stamina is vital for a wrestler because “When you’re out there on the mat, you’re putting out one-hundred percent of your effort at almost all times. If you can’t do that for the whole match, it doesn’t end well.”

Junior Elias Mack gained his aggression and experience from training Judo, Muay-Thai, Jujitsu, and Judo at the Compound Silver Spring for almost two years. He notes that training at the Compound has helped him with “Incorporating throws” and his “groundwork.”

Freshman Khalid Abdullahi, who is in his first year of wrestling, comments that “Marcus [Carey] has pushed me a lot because Marcus has taught me a lot of moves.” Responding to this, Carey comments that, “It feels good; it is a great opportunity to give that direction to him. Sooner or later he is going to be in the position I am in now and I want him to be able to pass on the lessons I taught him.”

PB’s wrestling team is managed by juniors Maria Gillespie and Aaliyah Marshall, who both note that the team is “physically and mentally prepared to face Northwood.”

Paint Branch Wrestling is also in need of a few more athletes to fill weight classes. According to Coach Warner, there aren’t any tryouts; just have your parents sign you up on the Parent Portal, get your physical, give it to Coach Podosek, and you are pretty much a part of the team.